When I first walked into the room, I thought the lion attacked him and ate his head. 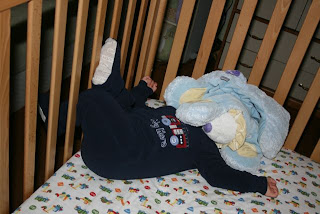 I yanked off the lion so he could breath. He was so annoyed with me and pull the thing back over his face. 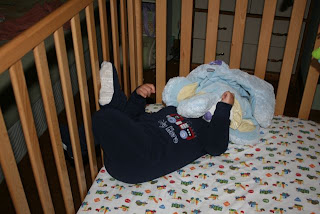 I took both these pictures at night after he has fallen asleep. Apparently, he likes to jam his legs in the gaps and prop himself up like that. Why? Doesn't that cut off circulation to the feet? I would try to rescue him and reposition him so he'd be lying flat on the bed but he would end up like this again in a couple of hours. Babies are strange.
Posted by langlangcreations at 9:50 AM