Right, so I spoil the kids. And then, there are my aunt and uncle. They babysat for me while I was in town. Boy, were the kids happy. Kira asked to go back to their house pretty much every time I yell at her.

They even let her play with their reading glasses. 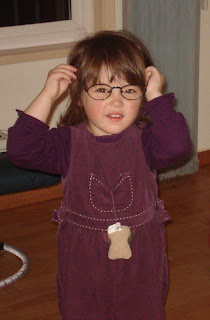 This little tyrant had my aunt and uncle running in circles. He wanted to drink from a cup, not a sippy, which he is not capable of and he wanted to go up and down the stairs about forty times in a two hour period, which he is also not capable of. So my aunt and uncle chased after him to make sure he doesn't kill himself going down and wiped all the water that he spilled. At the end of two hours, my uncle admitted defeat. He didn't think he can babysit the next time we are in town. This little tyrant is just too much work! 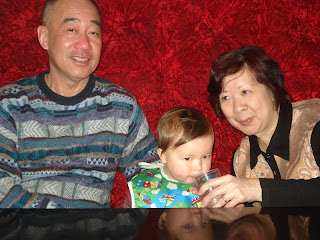 This is a video of some "quiet" night time activities.

Posted by langlangcreations at 4:43 PM