I made another no sew tutu as a birthday gift for a little girl who is turning 4. I decided to make this one as girly as I possibly could. It's not as full as some of the other ones I've made but there is an airiness to it that I really like. Kiki is quite fond of this one and asked that I make her one for her birthday. Yeah, she's been talking non-stop about turning three. Every day, she reminds me that she is growing, literally. She would say things like, "The Sun is shinning on me. I am growing." "I am growing bigger. I will be bigger than you." "I am turning 3. That's because I am growing and growing."

Anyhooo, she modeled the tutu for me to take some pictures and unlike the other times, she was totally into it this time and posed accordingly. She's seen a ballet class and so she was trying to move like a ballerina.

She is so flexible. 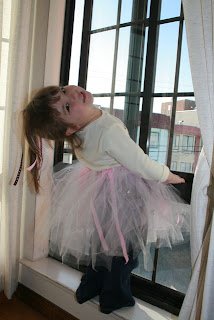 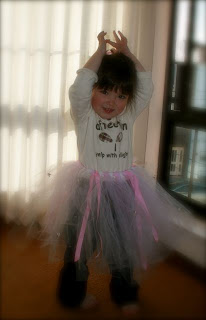 I am looking forward to some girly girly days. Hubby is probably thanking the higher powers for giving him a son. Otherwise, the house will be so full of estrogen that he may start to wear a tutu to work.
Posted by langlangcreations at 9:30 AM