I have forgotten about these pictures I took last week. The girl made slime at preschool... or maybe the preschool teacher made slime and let the kids play with it. Anyway, I used to make this with high school kids to introduce the idea of polymerization. I guess Flubber appeals to all ages.

The girl was the happiest I have ever seen her after preschool at the end of this lesson. She was obsessed with her Flubber. She cut it, rolled it, tore it, poked it. At the end of the lesson, she asked to bring some of it home. I almost had a heart attack upon hearing that Flubber is entering my house but really, this stuff is not as messy as it appears. The worse is when it's stuck to fiber (clothes, carpet, etc). Otherwise, it cleans up very easily.

Girl totally hyper when playing with her goo. 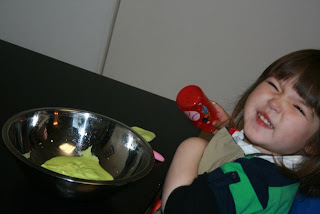 I think the boy actually gets the point of the slime more than the girl... not that there is a right or wrong way to play with this stuff. 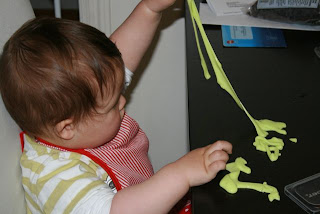 Little scientist at work. He was totally testing out different properties systematically. He made different piles for different tests. 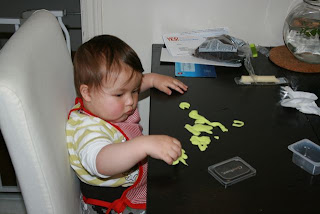 Goo lab in the kitchen. 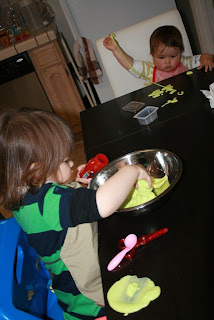 Posted by langlangcreations at 9:18 PM