Soccer with the Bots

Robogames 2008 was fun. The main event was of course the battle bots. Unfortunately, neither of my kids wanted to sit still for 6 hours and watch the games. So, I walked around the convention center with them to find more interactive things to do. Fortunately, there were a few.
First up is "Hot Shot" here. I think he is Kira's second favorite thing. He is actually quite smart. Unlike most of the other robots, he is not controlled in real time by a person. His AI allows him to converse and he does so quite well. He learned Kira's name and when we returned later in the day, he remembered her. That made Kira quite happy. 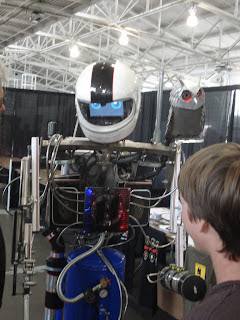 I think he is programed to talk differently with different people. He commented on Kira's nice backpack and asked her if she likes the colour pink (she was wearing pink). When a bunch of boys showed up, he asked them if they saw the game and asked for a high five. Then, a few giggly girls came along and Hot Shot asked them to take a picture with him and he asked if he could put his arm around their shoulders.

After chatting with Hot Shot, we went to watch Robo-soccer. They are cute but nothing like the real sport. The robots kept falling over because the floor was so uneven. The guy who was there with the bots was very very nice though. He was all ready to pack up and leave when Kira wandered up to him asking to play with the robots. He took one back out of its case and let Kira push the remote and walked the robot back into it's box to go night night.

Here are the kids waiting for the games to start: 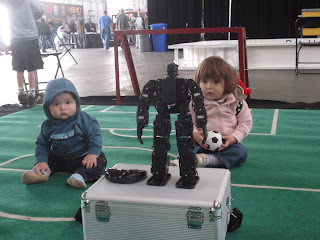 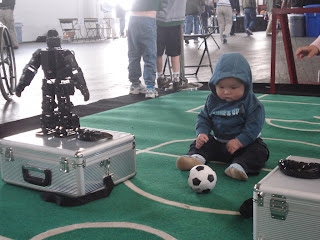 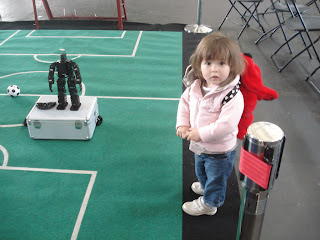 Posted by langlangcreations at 10:34 AM