I've taken some pictures in the past few days but haven't had a chance to post them. Here they are: 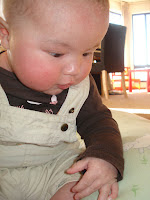 This is not a good picture of them standing next to each other. I'll have to try and stage it again. It does, however, give you a sense of Hayden's size. And on the other picture, I swear I didn't make Kira lie down and let Hayden ride on her. She volunteered! Really, she did. In fact, she really likes this game. When I put Hayden on his tummy for some tummy time, Kira often lies right next to him and ask me to put him on her. 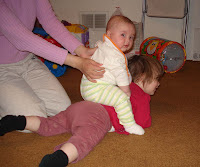 The discovery of Moon Sand. This stuff is awesome. Kira is playing with a fancier version called Delta Sand here. If you have a 'crafty' kid or one who loves sand at the beach, you have to let him try this. 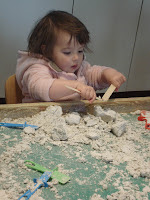 Isn't this a great picture of the two kids. Kira's really into hand holding these days. Sorry Brayden, I guess the relationship was not exclusive.

Little IKEA shopper in training. I have a compulsive shopping issue when it comes to places like IKEA and Target and Costco. They are blah but I love them. 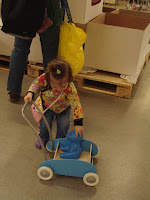 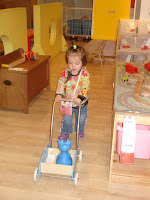 The boys wanted to play ball and run around the house but Kira somehow convinced them to play tea party. Maybe Auntie Sandra helped a bit. 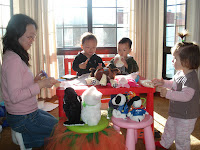 Finally, a short video of a budding musician.

Posted by langlangcreations at 3:10 PM