The best part about visiting Vancouver is of course being able to see people. For the first two days of the trip, Brett went to play Magic so I hung out with my friends and my aunt and uncle. Kira was in heaven with all the attention. Brett did quite well in his tournament, coming in 19th out of about 400 people.

Here are some pictures we took during the first 3 days: 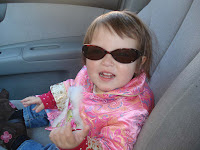 Kira with Gu Por. We went to the mall for a little exercise after our satisfying meal and there was a temporary play structure set up. Now, it's my aunt's turn to serve the little girl. They climbed, they ran, they went down the slide a million times, they sat, they jumped... I have never seen my aunt move so fast. While watching them play, I was reminded of my grandma. My aunt is looking a lot like Grandma and Kira looks a lot like me. Em... getting all misty eyed. 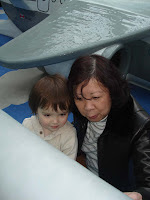 Hayden was sleeping on my lap during most of this activity. On a different day, we drove to the park to meet up with Kira's first ever boyfriend. Kira was way too exhausted and fell asleep in the car. This time, Hayden was awake and all smiles. So, I took some pictures of him while we were waiting in the car. These two were voted "best pictures" by people I showed the pictures to. They were titled "bao bao face" (bao bao being bread or bun) 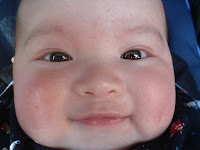 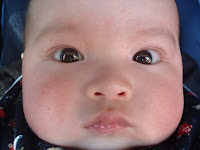 Kira eventually woke up from her beauty sleep in the car and we played at the park. We blew bubbles, fed the birds, went on the slide and walked around. There are some pretty funny videos and pictures. Here is the first one:

Kira never quite understood the idea of throwing food to the birds:

Posted by langlangcreations at 9:09 AM