I haven't given up blogging. I just feel like I have never recovered from the Girl's parties. We've been so crazy busy I haven't had a chance to sort my thoughts let alone my pictures. I know I will catch up though. For starters, let's look at some pictures from Healthy Kids Day.

The local YMCA had a kids' event last weekend to promote an active life style for kids. Different Ys did different things. Ours had a bouncy house, face painting, some games and healthy snacks.

First, the Girl convinced the Boy that the bouncy house is a great idea and then she abandoned him. 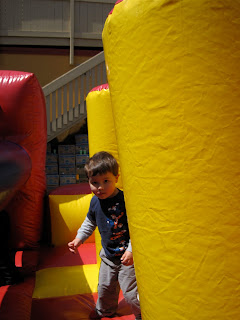 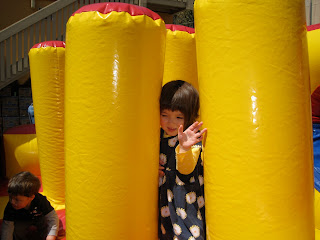 Both kids quickly decided that the bouncy house was too rough for them so we moved on to side walk drawing. Look at my little artists. 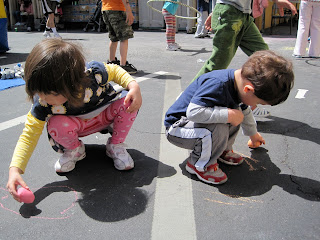 Soon after that picture was taken, both kids flipped out. One wanted a snack and the other just wanted to cry. Luckily, our friend came to our rescue and got some food for the hungry one while I took the crying one to the next activity - face painting. 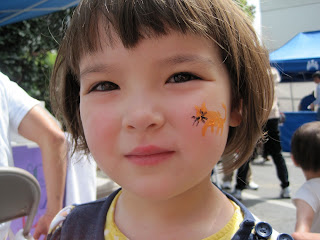 Usually, the Boy is not interested in sitting and letting other people touch him. However, he saw a red car on the book of pictures this face painting artist was using and he was sold on the idea. He sat still and got his car. 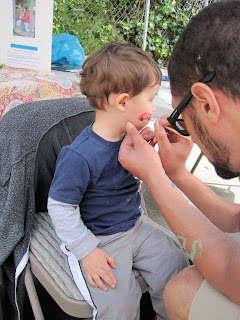 He was one proud kid. 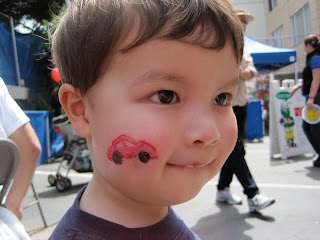 I don't have any pictures but I wish I could show you how obsessed he was the rest of the day. He stopped to admire the car on his face every time we pass by a mirror and he ate dinner in front of the oven so he could see his own reflection. The grumpy one was just, well, grumpy. 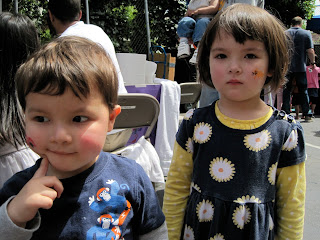 30 minutes before the event was over, we finally found the one activity that both kids enjoyed. We spent the rest of the time making a huge mess at the sand table. 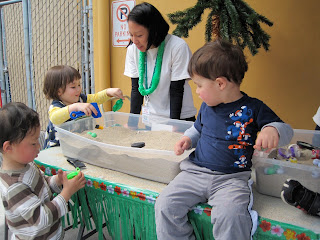 So in keeping with the healthy kids theme, we are going to try and have a screen free week. That means no TV, no computer, zero screen time. Today is day two. I have big plans to spend the rest of the week outside. I just hope the weather cooperates.
Posted by langlangcreations at 9:31 PM

Why is Kiki so grumpy?

I don't know... the Girl has moods beyond my control. Can't wait until the teenage years.

Parents of Andrew and Caleb said...

That looks like Andrew's race car on Hayden's face!