The estrogen level in our house is usually considerably higher than that of the testosterone level. I am not saying Hubby is not manly. He is at work most of the time and the Girl is so so so so girly and I kind of encourage and feed her girliness so the Boy usually just caves. I mean look at all the pictures of him dressing up as a fairy/princess/ballerina.

This night, one of the Girl's boyfriends came over to play and after dinner, he asked to watch Cars. Now, we have that movie and the Boy LOVES it. It is definitely his favorite and if it was up to him, he'd watch it twice a day everyday. The thing is, it's never up to him. The Girl is older and wiser and louder and can usually convince/outsmart/strong arm him into watching princess movies. The few (like one in six) times that he gets to watch Cars, the Girl makes sure he knows she is granting him a big favor. If he tries to talk to her about the movie while they are watching, (something like, "look at Frank chasing McQueen and Mater") she will reply, "next time, we watch Snow White, okay!" So he doesn't talk much during the movie.

Now back to the night of the play date. When the Boyfriend asked to watch Cars, the Boy immediately ran to where he kept his precious movie and brought it to the kitchen where we were all sitting and yelled, "I got it! I got the the McQueen! It's here, I can push the buttons!" (Meaning he knows how to work the DVD and he can set it all up.)

With that, the boys hopped onto the couch and started some serious male bonding. 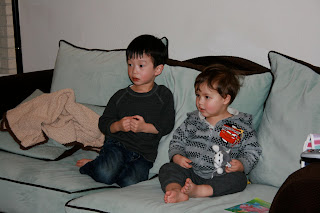 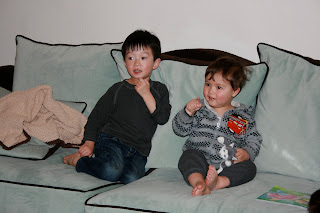 It warms my heart to see how much he knows and how much he cares about something and how much he want to share his passion with others but it breaks my heart at the same time that he never had a chance. Maybe I've spent too much time finding the girl a girlfriend to play with. I think it's time I find the Boy a pal.
Posted by langlangcreations at 9:42 PM

When shall we come by? Are you prepared for
k-next time is Snow White
h-after that is Thomas