Kira refused to nap one afternoon but patiently waited next to me while I caught a 10 minute shut eye. When I rolled over, she eagerly came over and said she wanted to cook something. I appreciated that she was absolutely quiet during my short nap so I took her into the kitchen and looked for something she could cook. I found a box of instant pudding mix in the bottom of my pantry and voila, we had an afternoon snack.

All I had to do was measure out 3 cups of milk. Then, Kira opened the package and dumped the content in a big bowl. She poured the milk in and stirred with a whisk until she was bored. I had to stir a little in the end to make sure everything's mixed. Kira scooped the pudding into cups while I defrosted some frozen strawberries we had lying around. By the time she scooped out the last bit, I put the strawberries in and topped it with a Graham cracker. 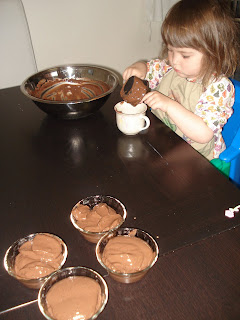 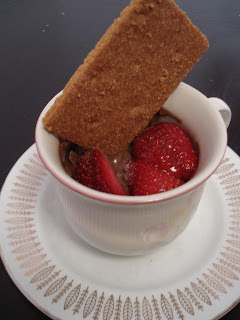 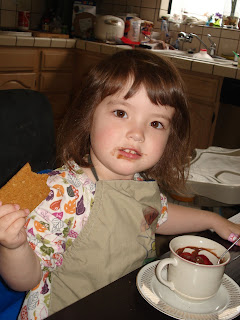 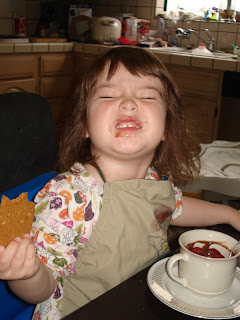 Talk about instant gratification. The whole process was less than half an hour. The pudding set super fast and she could eat it right away. I don't know if it's what you'd call a nutritious snack but hey, it was fun! I am eating one of the refrigerated cups right now! Yum!
Posted by langlangcreations at 2:53 PM