We, the whole family, watched the Oscars. We had dinner in front of the TV and Kira was quite excited about that. Baby was totally at ease and was happy that we were all finally at his level. (We sat on the floor and ate.) The results were quite predictable. We thought Benjamin Button won more awards than it really deserved. The Academy can be such suckers. We now have two and a half movies on our to-watch list - Milk, Coraline (not on the Oscar list but we still want to see it) and The Reader. The Reader only counts for half a movie since I really want to see it and Hubby is lukewarm at best.

The best part of the night was for me was when Hayden was released from his booster chair. I thought I was setting him free but I was wrong. He totally loved having a chair and the body language just oozed couch potato! 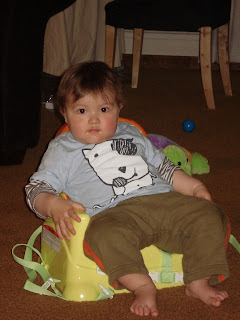 Seeing him like this totally make me want to sew him a baby couch. I have a pattern that's been lying around forever. I think I may just have to take action! 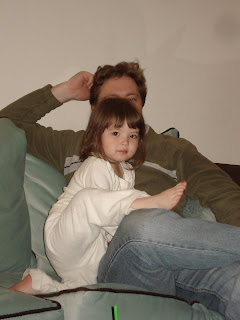 Posted by langlangcreations at 8:10 AM

Hayden looks older than one in that picture.

Give Hayden a beer and he's good. XD

Cannot agree more with both comments.