Baby made his first pizza! We actually started from fresh dough this time instead of pre-baked pizza crust.

He wasn't really into the making until I put the cheese on top. He's supposed to spread out the cheese. Instead, he just started eating the cheese. The ate so much that I think he picked out some dough and ate that at one point. I think the process was totally lost on him but he did eat about half of his pizza. He called it "caw caw" which is how he says crackers. 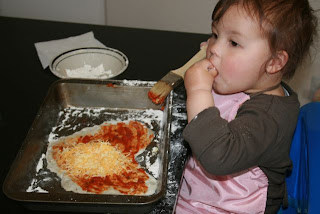 The girl went for a more artistic style. She called it the butterfly pizza. 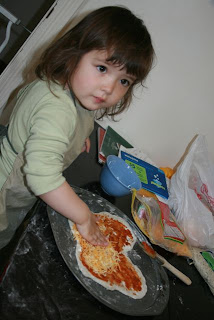 Posted by langlangcreations at 1:40 PM