Warning: Long post. May take a long time to read. Start at your own risk.

So we went on our 3rd annual Maker Faire Expedition last Saturday. A little recap, the first year resulted in a broken back and a very happy wife. Said broken back opted to not participate the second year so happy wife ditched the kids and went solo. This year, we decided to experience the Faire as a family again and I'd say it's a great decision. I have seen it twice and don't feel the compulsion to see EVERYTHING. Believe me, you can't see everything. There's way too much going on. The kids are a little older and can participate more. I can't say enough good stuff about this Faire so if you haven't been, put it on your to-do list. You won't regret it.

"It's quite the event. Let's dress up for the occasion!" 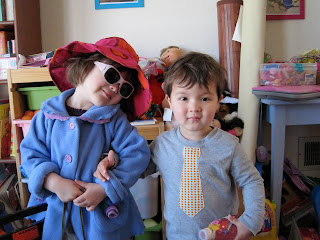 It was quite overwhelming for the kids to walk into so much stuff happening. Loud noises, crazy looking people, giant flames, etc. The Boy is especially timid so it took a long time for him to adjust. This was our first robotic encounter. If you look closely, you'll see that he was pulling me away from the Thomas-like robo-train. 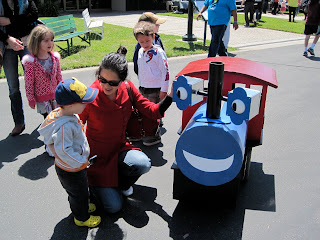 Next up was a craft your own hat booth. In the spirit of a craft fair, I helped the Girl make her first project at the Faire. Behold the catepillar and butterfly hat! 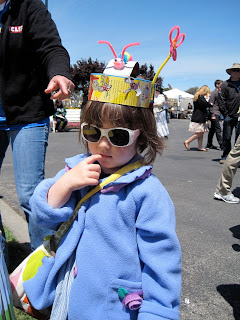 The Boy was still a little shy and he is not a big crafter. So he just took a sticker from the pile and put it on his hand. 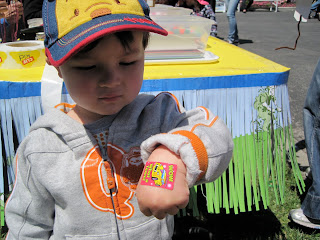 We stayed outside for a while and ate some crappy fair food. The thing is, there's lots of great food but I was starving and overstimulated and made the wrong choice again. Note to self: make sure to try the paella next year.

After the food, we went inside. There were lots of cool stuff to see and touch. The kids especially enjoyed "light doodles". It's a simple concept that can easily be set up at home but it's still fun to do it at a fair. 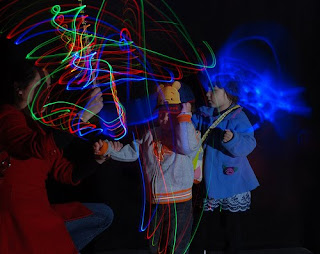 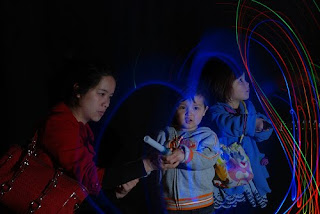 The Girl LOVES these pictures of her under a rainbow! 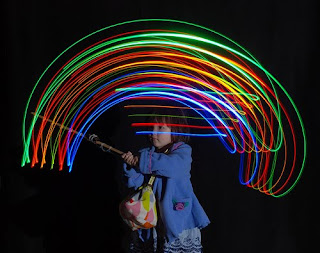 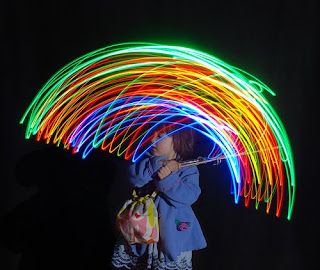 Along the "light" theme, the kids also explored this LED light table. Again, simple yet fascinating. 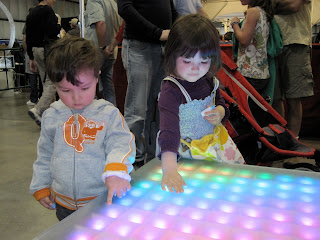 I remember going to a tech fair with my dad when I was a kid and was introduced to the first mouse. I remember how my dad told me I had to be very careful with it and that I would have to be much older before I would master the use of it. It was a huge deal! Look at how my kids are interacting with computers now!


Seriously, the use of a computer is going to be so different for the kids. A touchscreen is so intuitive. Unfortunately, I don't own a tablet laptop or a touchscreen computer so I am always yelling at my kids to not touch the screen. I am sure they are very confused by the mixed messages. Anyhow, I didn't have to teach the Girl how to use this software at all and she came up with this: 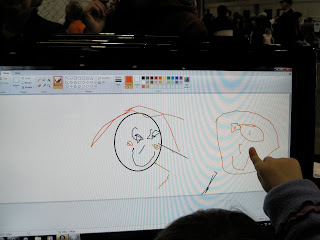 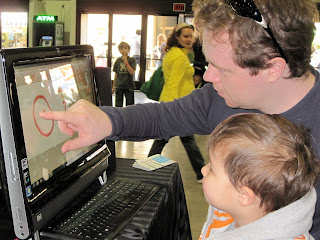 The Faire wouldn't be complete without a Lego setup or... sixty! Legos were everywhere. This train was one of the Boy's favorite. 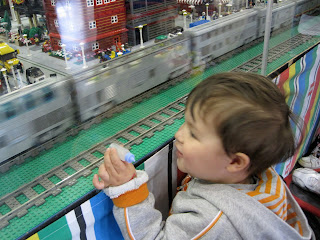 Hubby took the kids to see the Mousetrap while I went to the more hand-crafty area. Hubby took this picture. Since I wasn't there I can't say much about it except that I heard Hubby was suckered into carrying both kids through the whole performance. You wonder why/how his back broke that first year... 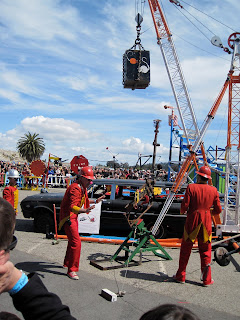 The handy craft portion was, in my opinion, pretty poorly planned. It was way too crowded in way too small a space. It's a very popular part of the Faire and it wasn't given enough space. I didn't enjoy that at all. No shopping or new projects to report from that.

The real highlight of the Faire for me this year was the best ever Mentos and Coke display! (Remember, kids, it's a physical reaction between the carbonation and the surface of the Mentos - not the chemical reaction that I made you write out a million times. Ah... this makes me want to teach science again!) I have done the Coke geyser thing a few times but this was truly amazing! According to the performers, it took hours to prep and the show lasted about 2 minutes. Total labour of love.


Here is another video of the same two guys at a different setting doing a slightly different routine.

That pretty much sums it up. There were lots of pyro displays. We took some pictures but they were more impressive in person. We also learnt that the Girl is a pyromaniac and the Boy is... what is the opposite? The Boy whimpered in my lap while the Girl kept asking for more. I am a little worried about them both.

We finished out day by having a buffet dinner. The big finale was candy covered ice-cream cones. I don't think I have seen a more earnest ice-cream eater! 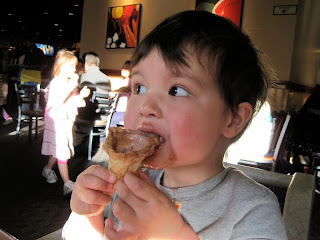 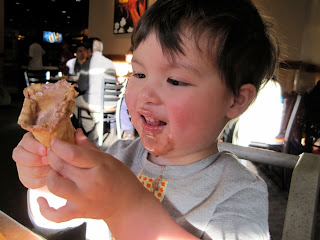 "That was a totally awesome day. See you at the Faire next year!" 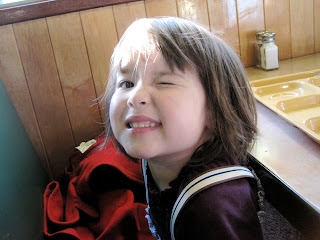 Posted by langlangcreations at 9:35 PM