I mentioned before that the Girl's debut performance was this past weekend. It was a very crazy day that involved blood and the emergency room. Everyone's fine. Nobody in my family was hurt. The accident involved a friend that I invited to the recital and from what I have heard, she is recovering nicely.

With so much happening, we didn't take many pictures. We didn't even get to see the whole show. I took some pictures during the dress rehearsal and here is one of them: 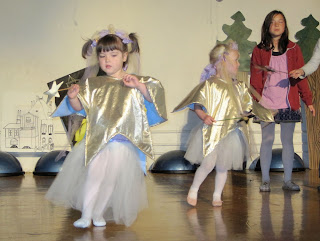 Here is a video of part of the dress rehearsal. The Girl had a lot of fun running in circles on stage.


I was able to take a few pictures before the show started on the day of the actual performance.

Here she was getting her make up done. 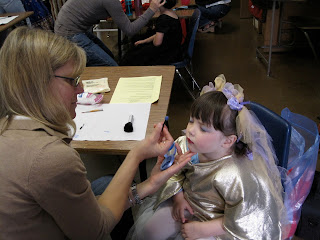 All made up. I was not as shocked this year as I was last year. 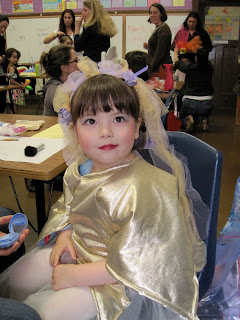 Final touches put on and she sat very nicely near the stage to wait for her moment of glory. 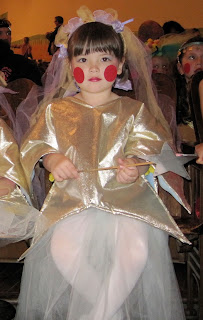 The idea is that there are toys in a toy box that were brought to life by a couple of toy fairies. The Girl was one of the star dolls. This is a video of the actual performance. It's pretty hard to spot her if you don't know where she was.

There were lots of little dancers on stage and none of them had seen the whole dance come together. One of the most magical moment for the Girl was when the Toy Fairies came on stage to wake up the other dolls. These Toy Fairies wore ball gowns with lights attached to the bodice. The Girl was so impressed and mesmerized that she later asked me if the fairies were real. She felt pretty special that these beautiful fairy princesses had come to dance with her.
Posted by langlangcreations at 10:55 PM

So incredibly cute!!! I am glad she had a good time performing this year. She seemed to be pretty at ease! And great job on the costume by the way!