Now that the girl is MIA in the mornings, I can turn my focus to the boy. It's been so wonderful being able to spend some alone time with him.

He is older now and can do so much. He is communicating very well and is quite clear on what he wants and what he doesn't like. For instance, he is currently very anti-people. The girl at this age had some problem with other children but she always enjoyed attention from adults. The boy is just anti-social all around. He doesn't like adults but can almost tolerate them.

However, when it comes to other kids, he is quite clear when saying over and over "no playing with kids". I have been trying to go to playgroups with him so he can have friends of his own but he is just not into it at all. I used to think that he didn't like playgroups because the older kids didn't let him play. On this fine morning, we went to a baby playgroup and he was the oldest. Before we went, he said, "No playing! No kids coming! No go to kids house!" during the entire trip over. I thought it's going to be painful for me. In the end, he did okay.

One perk for him is that other boys have real boys' toys. We have trucks and cars and things like that too, but they are usually hidden under a pile of dolls or placed under blankets while being put to bed. It's just not the same. 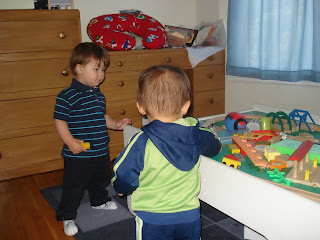 As you can see here, the boys are playing next to each other, not with each other. Now that I think about it, the girl's playgroup was like that for a long time before the kids started interacting with each other. I guess we just have to keep going and teaching him how to be around others. 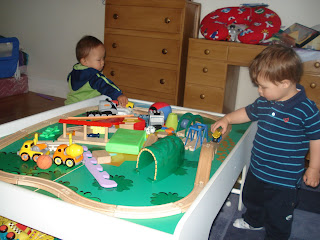 Note: I did not refer to the kid in blue as "baby" once in this post. Is it possible that I am accepting the fact that he is now a boy?
Posted by langlangcreations at 8:40 AM

But he IS a boy, Mommy! Especially with the blue polo shirt.