The post really should have come before the Preschool post. The day before the girl started school I got all emotional thinking it's the end of an era! We spent pretty much every minute of the past three years together. We did whatever we felt like with no schedules to keep. It's sad for me that I will no longer be the center of her world. So I decided to do something super fun on this last day.

I had heard from ONE person that FLOAM is the best thing ever. FLOAM is a sculpting medium that resembles Styrofoam beads suspended in Slime. The idea was so appealing to me that I went out and bought a pack. I read some reviews after I came home with the stuff and was shocked to see horrible horrible reviews across the board. It seems that everyone hated it. The reviews included, "it's the messiest thing on earth" "it's useless" "it sticks to everything" "false advertisement" "stay away at all costs". 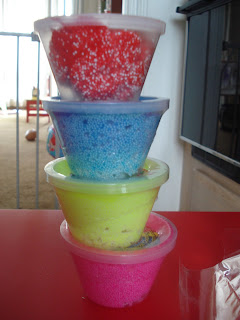 Em... I already had this stuff in my house and had already promised the girl some fun Floam time by the time I read the reviews. So I had to come up with a back up plan. I was ready to deal with the mess but I was not ready to deal with the disappointment. So I went and made some cornstarch playdough and thought I may be able to build a volcano with her. 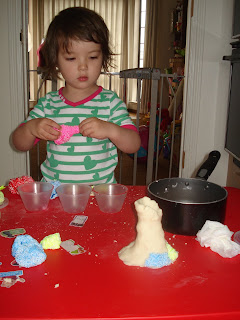 "Fortunately", when we opened our batch of Floam, it was horrible not because it was sticky and messy but because it was dry and there wasn't much you can do with it. So we used the Floam to decorate our volcano. 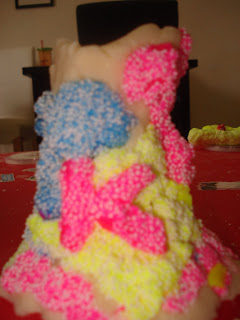 We named our volcano K Mountain. Then the girl decided it's not fair to the boy and we named the other side Mount H. 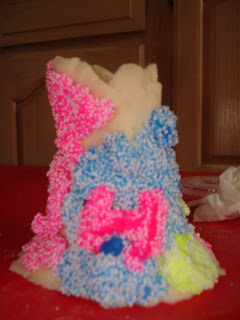 So, the volcano is complete and it was time for the magic.


We did this over and over for a long time until the volcano was one soggy mess. Remembering that one Floam reviewer warned that when flushed down the sink, this stuff will dry 3 months later and destroy your pipes, I decided to add our creation to the landfill. Sorry Earth. I promise to never buy this junk again. As you can see in the video, we've made quite a mess by this time but the kids were still not done with it. They were temporarily distracted by the bucket of water I left out to clean the Floam in case it was sticky.

After "washing their hands" about 20 times in the little bucket, the little ones asked for more. I am a real softy for happy kids. I just couldn't break up the party. So I decided to do a little more volcano magic. I took out a bowl and gave the little people the "potion" and the "dust" and had them throw the ingredients in the bowl together. You would not believe the ooohs and aaaahhs I got. Then, they both decided they wanted the dust and so I just left a bowl full of potion on the table and gave the each a small container of dust.

This went on for another 20 minutes. 3 cups of potion and 8 little tubs of dust later, the kids were wet, powdery, so incredibly proud of themselves and very satisfied with our little experiments. This was the cleanest messy thing I have ever done with them. All I had to do for clean up was to wipe the table. The potion and dust mix cleaned their table so exceptionally that I considered cleaning the whole kitchen. (Who was I kidding? Me? Clean the kitchen? Nah!)

I threw the little magicians in the bath tub and let them play in the water for a while. Since they were magicians, they were way too fast for me to catch and cloth them. Therefore, they ran around the house naked for about an hour and collapsed on the floor while I fed them dinner. They talked and talked and talked about the magic and how fast they were running. What a fun Pre Preschool bash!

I can totally imagine the two running and giggling while u tried to catch and cloth them!! Those two r hilarious!!